The fifth chapter of Tarus Space is in the works. Our team usually starts with concept art, script writing and the plot. After that comes sketching (for concept art), approval of designs and storyboarding. For those unfamiliar with what storyboarding is, it’s basically a bunch of quick sketches (very low quality) of how you want each page of the comic to play out. It decides the panel layout, where text might appear, what the people within are doing and the major important details.

Everyone on the team has day jobs, mostly because we like eating and not living on the street, so what would take a usual full time writing team days, or perhaps a couple of weeks, gets stretched out much longer for us. But, there’s a silver lining. Ideas sit in the writer’s head much longer and they get to cure and become a little better before they get put onto paper. There’s a sort of visualization that happens in the writer’s head, like a movie playing out, and then snapping scenes from it and putting it into panel form. What are interesting angles? What are the important moments? What’s fascinating to see? How do you play out the larger plot with this? How do you make it amusing and comedic?

Script writing helps pick out the larger plot that goes from page to page, while the storyboarding helps to decide the exact scene setting, dialogue and narration. For me (the writer), the main parts to storyboarding are:

I try to layer those into the storyboard and then cut out the cruft. You end up with something that looks simple, or at least it should look simple. It follows something that is very similar to my day job; in the software development world there is a tendency for people to prefer rube goldberg level codery that baffles the most senior of developers but the real charm of programming is building simplistic solutions to tough problems that even a five year old can understand. Complexity is a sign of compensation in coding and, to me, it is also a sign of compensation in writing/plot design. I’m partial to highly complex plots myself but I think it’s better rephrased as “intricate but simple plots”.

That being said, I look back at the previous chapters in Tarus Space and I think of these major flaws throughout:

I will just have to content myself with writing better this chapter.

Also, here is a preview from the storyboarding (behold and despair when the writer tries to draw): 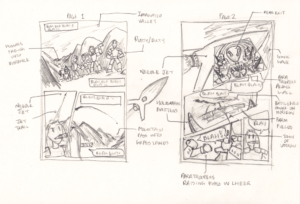